Climbing ropes present a plethora of tangled specs that will twist your mind in as many kinks as a new rope that has been improperly uncoiled from its package. Yes - there is a method to that, and to all the other madness and magic that goes into sheaths, cores, dry treatments and when and why to choose a single rope over double/half ropes, or twin ropes. Our current review covers double/half 60 meter ropes for ice and alpine climbing. We will discuss when and how to use them, what their main differences are, and what to look for in a new pair for your quiver.
‍
While we all have our preferences on whether to use a single lead line as opposed to double/half or twin ropes, there are some technically sound reasons to risk the ‘clusterfunkle’ that often happens when using double/half ropes - especially on ice and mixed climbs.
‍
If you learned to ice climb prior to roughly 2010, you most likely thought that you had to use double or twin ropes to be safe; in case one of them got cut by the accidental crampon or tool strike. Today, many experienced climbers will choose a single lead line and take a tag/rap line if at all possible to avoid the hassle of leading with two ropes. But, ice and mixed lines have a way of meandering, and being able to clip one rope separate from the other often allows for safer, straighter lines, less rope drag, and the bonus of always having enough rope to rappel.
‍
For the record, a twin rope must always be clipped together, whereas a double/half rope is rated to be clipped independently only. (Note: A rope should only be used as it is designed and tested for.) If the double is also rated as a twin, it can be clipped together as well but it should always follow one method or the other from the start. For example: if you clip it together through your first piece of pro, then you should continue to do so.
‍
This review focuses on double ropes, as they are quite useful on routes that wander, and for routes that require two ropes to rappel anyway.  Clipping a “half” or double rope separately through different pieces of gear provides less drag, and in the case of a fall, will prevent a huge swing. There is also some security in having two ropes, in case one gets nicked by crampons, ice tools, or rock. Since twin ropes are rated to be clipped together always, they do not offer as much versatility.
The trick to climbing with double/half ropes is keeping the two ropes sorted at the belay, and not crossing them while leading. Communication with your belayer is also crucial, so that they know with which rope to give you slack when clipping. They can also help advise you which color rope to clip on a steep climb when you might not be able to see below you. Double/half ropes are also useful when climbing in a party of three. That way, each follower can tie into one line and move independently from the other.
‍
We tested four different double/half ropes for this month’s gear review. Our testing focused mainly on the weight, durability, value, and overall feel of these ropes. 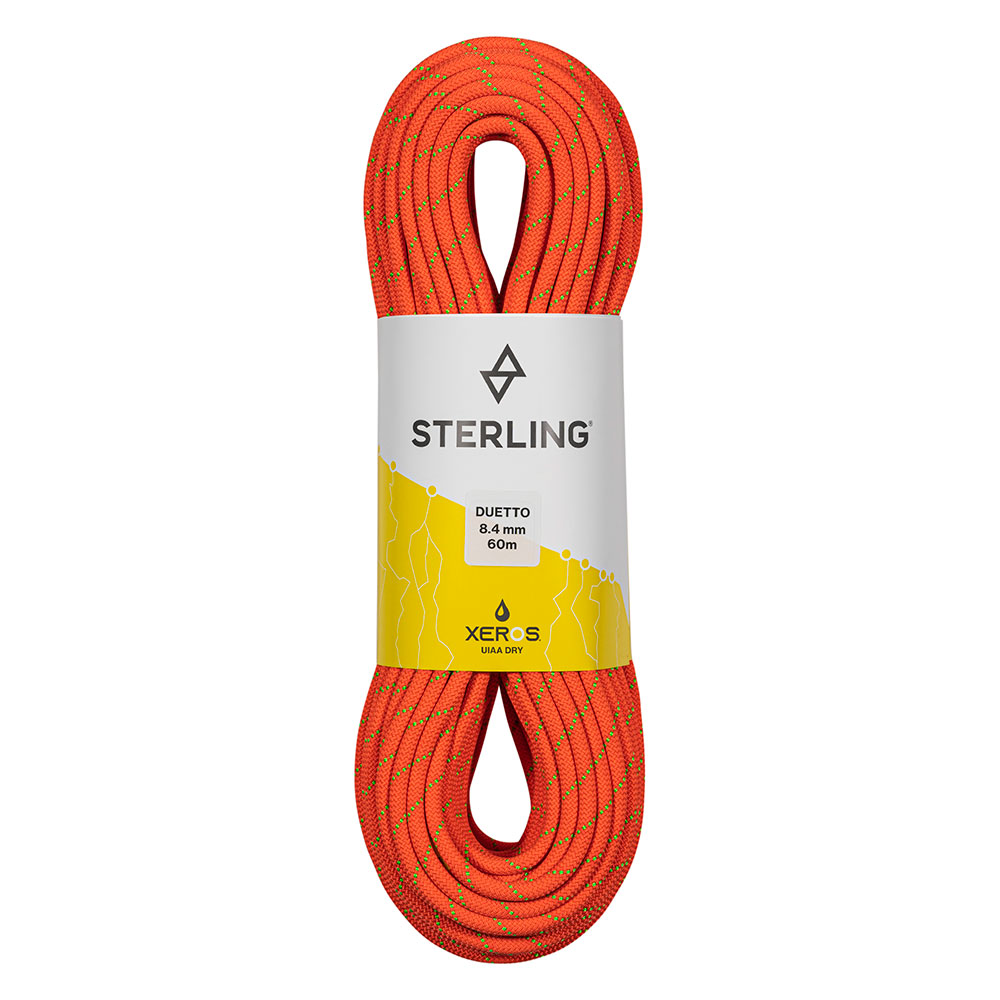 Pros: The Sterling 8.4mm Xeros Double is our favorite pick this month. These ropes are incredibly supple right out of the bag, but have the same impressive durability as ropes with a much stiffer feel. Because they are so durable, they weigh a little bit more than some of the other twins we’ve used, but the trade off seems worth it. The Xero Double handles super well and packs down small, due to its supple feel. A functional dry treatment has been applied to the yarns before the rope is woven, so it lasts much longer than ropes that have been dry treated after they’ve been woven.
‍
Cons: The two main downsides to this rope are the cost (it’s expensive!) and the weight (it’s not quite as light as other ropes we’ve used). 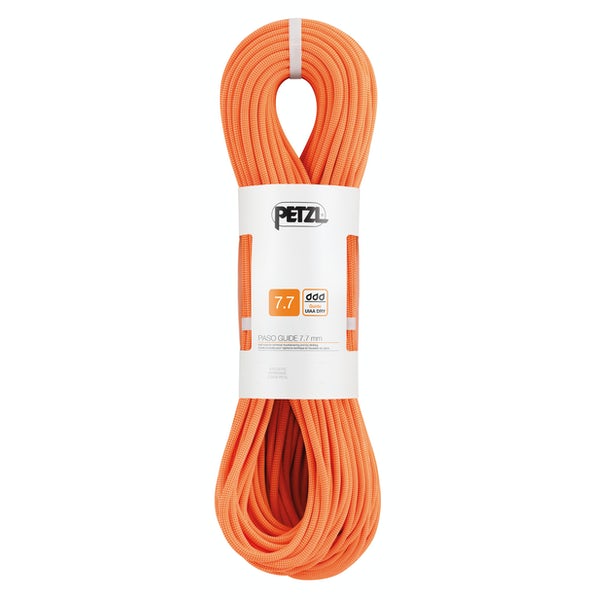 Pros: We like the Paso Guide partly because it is super lightweight and partly because it is supple, easy to use, and carries well.
‍
Cons: Unfortunately, the downsides slightly outweigh the upsides for this rope. We were a bit disappointed by the overall durability of the Paso Guide - the dry treatment wears off quickly and the sheath gets nicked easily. This one is also fairly expensive. 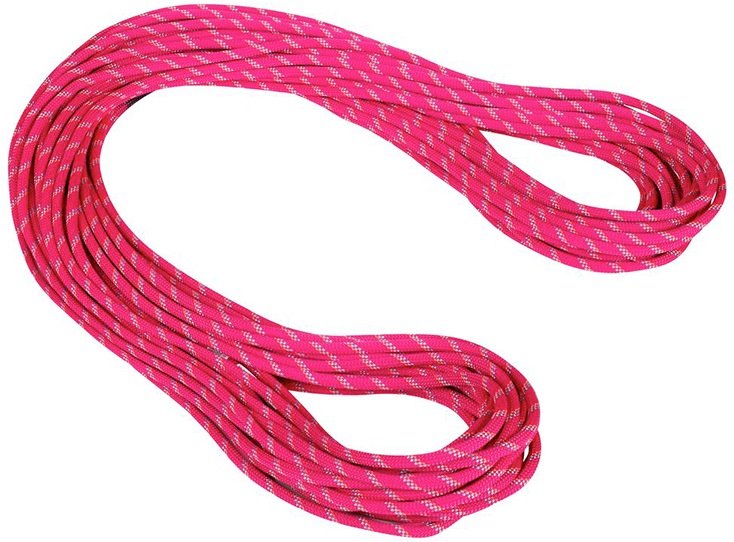 Pros: The Mammut Alpine 8mm comes at a reasonable price and has a great feel. The dry treatment is long lasting and effective and the rope runs well through all devices.
‍
Cons: A minor issue, but still a bit of an annoyance: the middle mark wears out quickly on these ropes. In a pinch, our tester used these ropes for traction under a stuck car tire! They are so slippery that they were spit out immediately and showed no sign of wear. Though not ideal, this experiment was a testament to their durability and dry treatment. 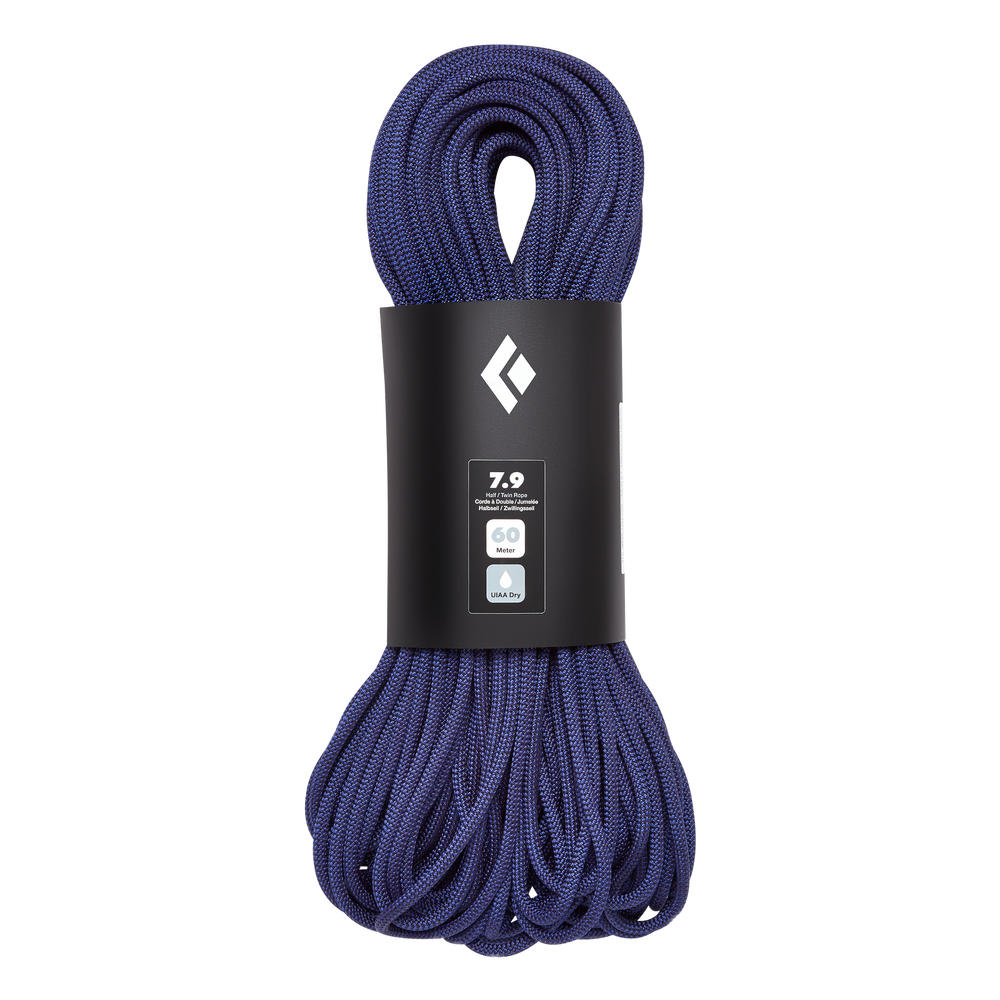 Certified to Double/Half
Weight: 39 g
Price: $109.95 each
‍
Pros: Like most Black Diamond ropes, the 7.9mm has a stiff feel. That said, it still feels somewhat supple. These are the least-expensive double ropes we tested, and their value is matched by their overall durability. The dry treatment is done on both the core and the sheath, which means it lasts a long time and is very effective.

Cons: This rope is a little stiff for those who prefer a more supple hand-feel. The middle mark is too light and the end tags get caught up on rappel at times.

Disclaimer of Liability: Technical rock and ice climbing is inherently dangerous. Neither Broad Beta, LLC., nor any of its employees, shall be held liable for any improper or incorrect use of the information described and/or contained herein, and Broad Beta, LLC. assumes no responsibility for anyone's use of the information.
Any person using our gear in any manner is personally responsible for learning the proper techniques and good judgment. We strongly recommend that every climber seek instruction by a qualified professional.

Have thoughts about gear? Let us know.

We would love your feedback and suggestions! Please submit questions on gear, your suggestions on related products you love and why or why not, reviews you would like to see, or any other input on our gear review to help make this as helpful
to you as possible! Thank you for reading and joining in this community effort.
We will occasionally post responses and comments anonymously that will help our readers. We will respond to your submission within a week to 10 days.

Thank you! Your submission has been received!
Oops! Something went wrong while submitting the form.

Next up: How to Build a V-thread