One night, in Bozeman, Montana, one of my climbing partners, Leslie, came over to my house to talk about some of the routes in Yosemite Valley she was interested in. I am saying “she” because I couldn't really tell the difference between aid routes. I only knew that when the grades go higher the routes become more dangerous. My lack of knowledge made me nervous and made me wonder  if I should even choose such an objective. But I had that urge to climb a big wall and looking around at my peers I felt that I was just as qualified. Once in the Valley, I studied the topo of the Salathe Wall and again questioned  my urge to do a big wall. Endless questions swirled in my mind. What if I can’t keep up with my partners? What If I hold everyone back and must bail on one of the pitches? Originally, Leslie, Jeannie and I planned to climb the Salathe Wall on El Capitan. But the unprotected chimney pitches had us doubting our abilities.
After climbing for three weeks in the Valley we decided to climb Lurking Fear instead. Lurking Fear is known for being a more beginner climb with its 19 pitches and the V 5.6 C2+ grading. A wall this size felt more approachable and as it was my first time big wall aid climbing, a better fit to learn on and gain experience.
‍
After a rainy weekend, we queued up alongside multiple other parties to fix the lower pitches of the route. The first day passed slowly while passing one party and sitting in hanging belays for eight pitches. We had some splitter C1 pitches but the hanging in the harness got all of us pretty tired. I thought I would finish the day with a C1 offwidth pitch. A pitch of climbing had never felt so slow and never-ending. I bumped two #4 cams for 80 feet until I could leave another piece of gear. It was terrifying. The climb traumatized me by being exposed and only depending on those two #4 cams that would surely not fail and had to be placed thoughtfully. I guess I was nerve racked when I finally got to (another hanging) belay. Once Jeannie and Leslie followed up, we got the haulbags stuck at the very bottom. 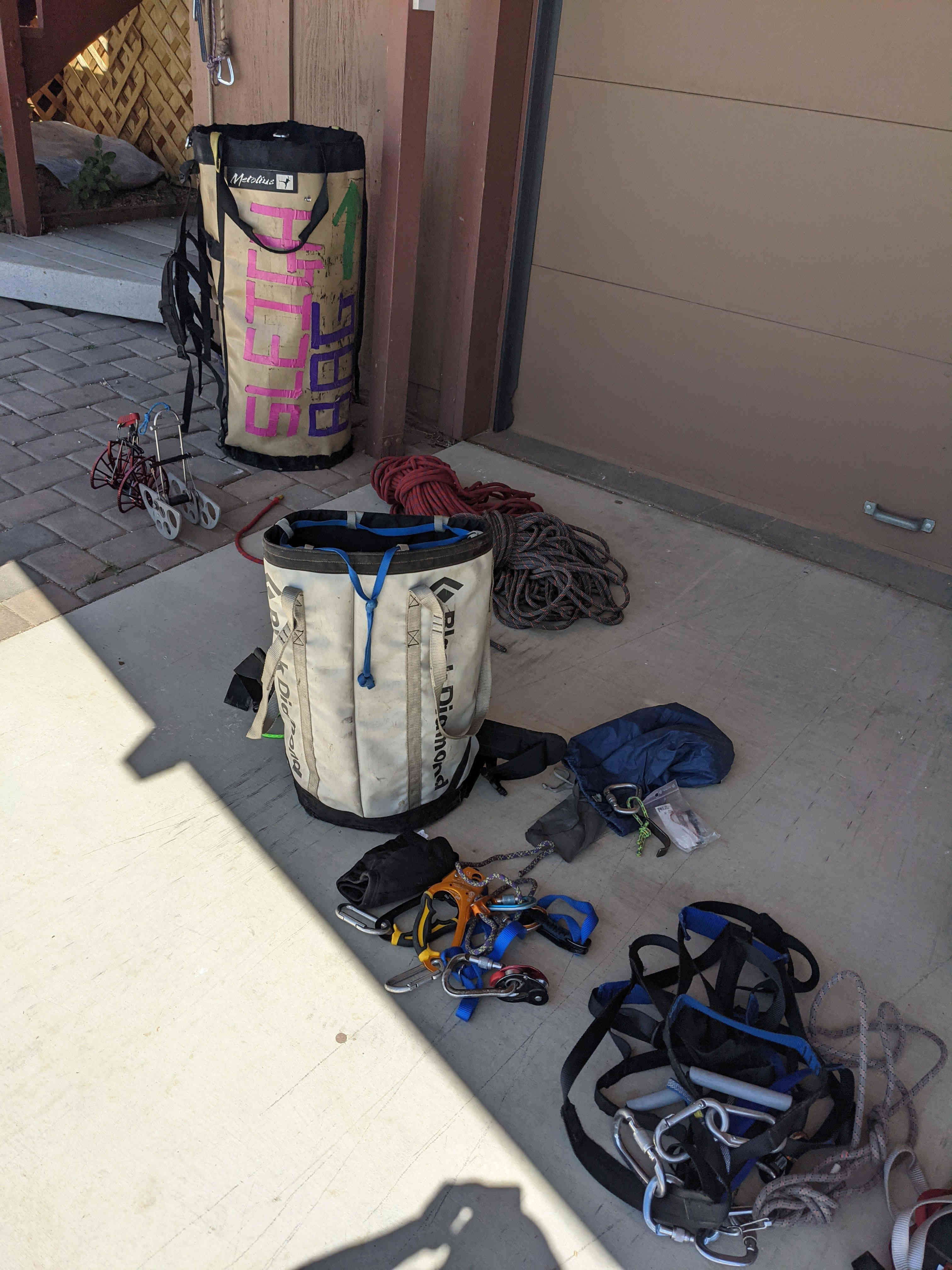 Sorting gear for the trip to the Valley. Photo courtesy of Leslie Gains-Germain.

Time passed and it got dark. I was getting terrified of climbing in the dark. With headlamps and exhaustion, I couldn’t trust my own, nor my partner’s judgment anymore, especially with rope work. Leslie offered to take the lead and began a quest to find a bivy spot that was off route and supposed to be a traverse. She passed a bivy with two boys that were not willing to share their small ledge with us at all.At this point I was so overwhelmed and tired with the darkness, that I just wanted her to come down and set up our portaledge at our hanging belay instead. Poor Leslie was confident she would find a better bivy, and convinced Jeannie that we ought to keep moving. This turned out to be the right decision. Jeannie and Leslie had been following at this point and felt more energized than I did.

Deep into the night, we made it to our ledge and set up camp for the night. We ate dinner at midnight and witnessed the controlled burns in the valley. It felt unreal to see the valley floor burning while we were sleeping high up on the wall. I was so tired and worried. Worried about not being able to continue to climb the next morning because I was so tired. Leslie and Jeannie shared the tiredness, but once we packed up camp, we all felt energized enough to continue moving. 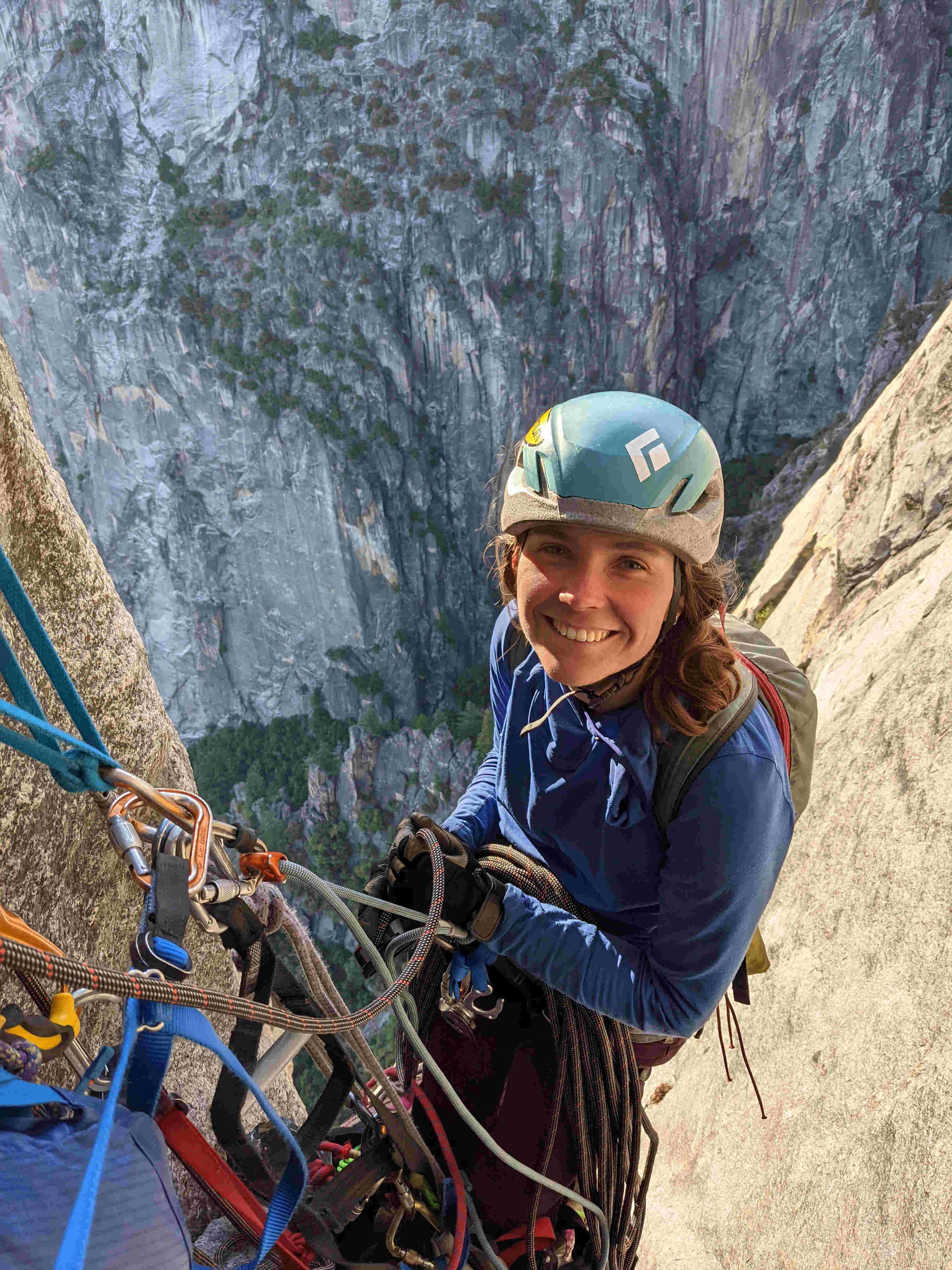 I was surprised by the transformation of my body from exhaustion to normal climbing ability. We were immediately reminded of the popularity of this route. The two boys (26 and 17) were still in camp when we rapped down to them to get back on route. I waited at the bivy and watched Jeannie and Leslie navigate the next three pitches. Once Jeannie almost finished her pitch, a speed party showed up and started to climb right on her gear. They were passing the boys and us (they were boys of course too). At some point the leader started talking about a rope on route and Jeannie asked very politely “are you talking to me?” It is hard in those moments to not get a feeling of ignorance and disrespect from climbers like him. I can’t tell how women usually behave since I rarely pass women in the mountains. But, to me, it seems like men have the very typical attitude of pushing their own ego at any cost. We were not concerned that they were faster, in fact, I was quite amazed by it. But, we expected respect and empathy from everyone else on the wall. The rest of the day went well, and we arrived in daylight at an incredible bivy that we had to ourselves. It was a medium-sized platform with caves building up along the ledge. We went to bed early and gave our bodies a well-deserved rest. We felt like the worst was behind us, with only a few more pitches guarding the summit above.
‍
The next morning, Jeannie and I roshamboed for the last two (free climbable) pitches, and Jeannie won. We all were very excited to get to the top so early. On the first pitch off the ledge, we left a cam a little off route and I was not able to clean it as a follower. We left the cam in place and Jeannie continued leading up the second pitch while Leslie and I sat comfortably on a small ledge.  As Jeannie climbed up, we shouted up to her to suggest she lower down and clean the left cam while on lead. She put in a piece of gear and weighted the rope.

At the belay,  Leslie was to the left of me, and we were sitting with slack in our PAS. The haulbags were hanging on the steep wall to our right. Suddenly, Jeannie’s piece blew while she was lowering off. Leslie got pushed to the right, into me and the rope wrapped over my harness.  Shocked, surprised, and completely tangled in rope and haul bags, we were unable to get out of our jumbled position at the belay.  Jeannie, who was fortunately fine, immediately began to jumar up the line that was strangling us. We fixed another line and Jeannie switched over, which released us from the weight of the rope and allowed us to assess our own condition. 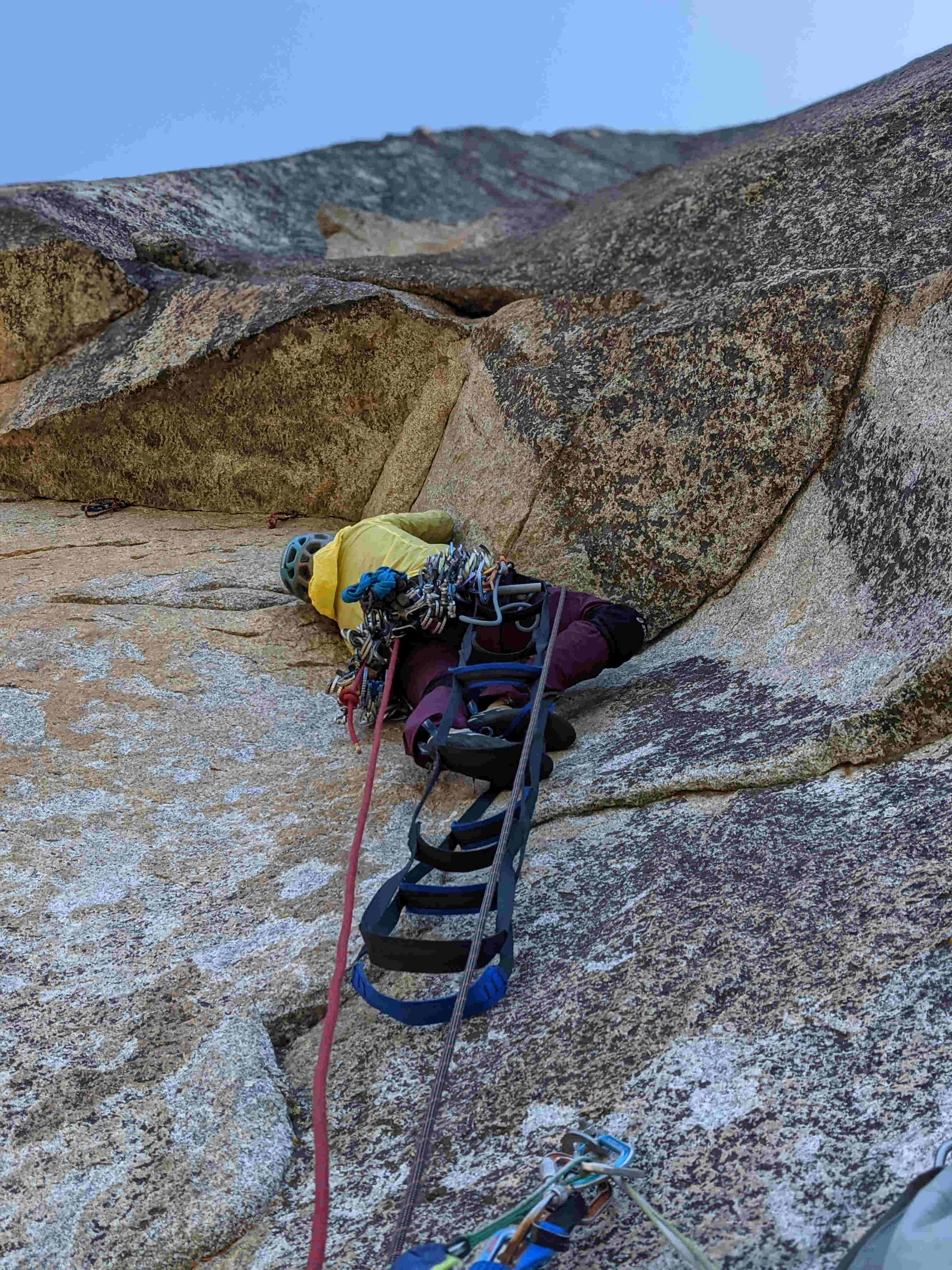 We were all rattled, and I was concerned we weren’t going to make it off the wall. As we calmed down after the initial event, I noticed Leslie’s arms wedged in between our harnesses. Next, I became aware of the pain in my leg.

Once we were all back on the ledge again, my leg pain continued, and I took a few painkillers. I think Jeannie was still in shock and just continued up the route. Leslie was the most conscious of the three of us, and pushed me to contact Akio, who was down on the Valley floor. I wasn’t sure how bad my leg was, but quickly realized that I couldn’t really climb with it. I dragged my leg over the rock and used my knee instead of my foot. Leslie and Jeannie worked hard to get me safely up and to haul up the bags on the slow slabs.

Daniel, a friend of our’s, ran up to meet us on the summit. Shirtless and fresh-faced, he provided a sharp contrast to our haggard-looking crew. I took more painkillers and the five of us - Jeannie, Leslie, Daniel, Akio, and I started down the East Ledges.  Without them I would have lost all motivation to endure the pain of walking. Every hour or so, I needed a break and the tears and frustration overwhelmed me.. After a slow eight hours we all made it back to the parking lot.

Leslie discovered an open wound on her forearm when we reached the top of the route and Jeannie began to notice pain in her back from being caught by the rope in her harness. Other than that, we were lucky none of our injuries were worse.

Back at home with my broken leg I was devastated. The guiding season began and I wasn’t able to work. My mind was still functionable and I decided to do a recap of our ascent in the backyard. I still couldn’t have asked for a better experience climbing with these two women. We believed in each other’s abilities. We supported each other and acknowledged each other’s skills. There was little ego involved and we treated our ascent as if it was a problem we all worked on together and tried our best to solve.

I knew that this ascent was going to be exhausting and hard for me. But it was an exhaustion and difficulty that I didn’t give any judgement to. It wasn’t because of my personal weakness or inability; it was hard because it was hard! With men, I often compare myself and view myself in a bad light, as if I’ll never be able to achieve the things they can. Climbing with Jeannie and Leslie made me feel closer to my personal climbing. We all had different climbing abilities and different levels of experience, but we shared our emotions and were open to each other’s thoughts and perceptions while on the wall.  I felt more like a climber than ever before. 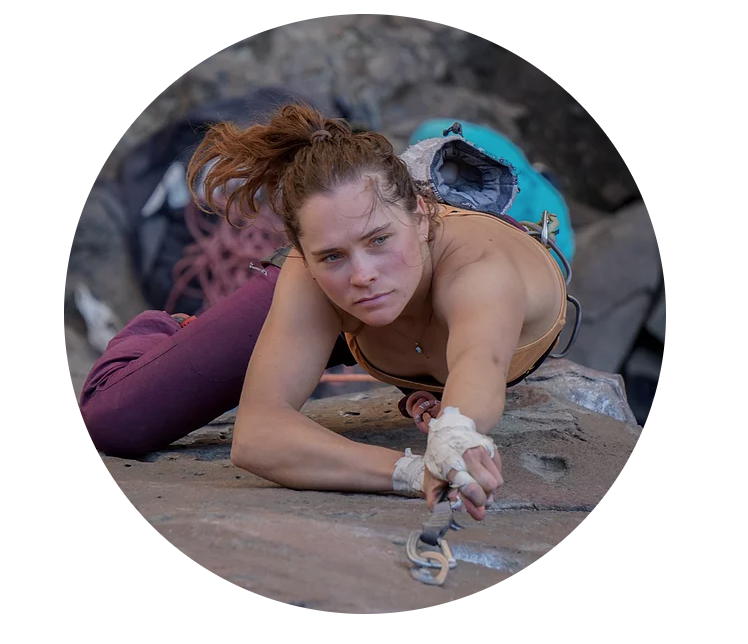 Anju Samuelson grew up in Berlin, Germany and lived in Turkey, Chile and the USA. Anju is currently taking AMGA Rock guiding courses and finished the first Rock Guide Course in April. She has been climbing for 7 years all over Europe, the US and South America. Her passion is to explore cultures through rock climbing trips, that is why she speaks German, English, Spanish and some Turkish. She is also passionate about mental health and continuously explores the world of emotional awareness and perception. In her free time she is found rock climbing, ice climbing or skiing.

Next up: Women's Rock Climbing Pants