Dance With the Mountains

Our hips gyrated from side to side then forward and back. Metal ski poles clanked raucously in the cold air at 9,000 feet. Lizzie’s recorder intermittently squealed like a wounded Pika. We sang out lyrics of a song from the movie Dumb and Dumber. One of us yelling “mock” while another came in on beat with a “ing” and me ending by yelling “yeah.” We went on like this till the music was over, then we broke out in frenzied “freestyle” dance. We were in our element, exhilarated and uninhibited in the embrace of Mother Earth. Her mountains curtained out in front of us as we bent over laughing at the conclusion of the outburst. As if embarrassed by our antics the landscape blushed in soft pink and orange morning light, wrapping us in the life force of undeniable beauty. For the three of us this was home.

Katie Gill, Lizzie Gill and I grew up in Bozeman Montana and have spent our lives exploring the western woods, deserts, rivers and mountains. Our parents are close friends and shared the commitment to immerse us kids in backcountry adventure. Spring hikes in Utah canyon country, summer river trips in Montana, winter ski adventures to Forest Service cabins. Since birth we had shared campsites, raging storms, whitewater rapids and desert sunsets. By doing so, our parents passed on their love, passion, and drive for wild country. Now, on our own, we carry that torch forward with wild abandon. There is an unspoken comfort between us, a childlike happiness in the outdoors. It’s a rare and precious friendship. Many of us who have the drive to explore the harsh, rewarding depths of wild country seek out this kind of companionship. We search for partners who we completely trust, fully support, and who are driven by similar goals and values. It is doubly hard to find such friendships as a female in the male dominated outdoor world.  So, when you’re lucky enough to find wild soul mates you hold them close.
‍
In early winter last year Katie, Lizzie and I poured over maps plotting our next adventure. This Idaho, Sawtooth Mountain trip was a Plan B. We decided to switch routes last minute due to a lack of snow, dubious avalanche conditions and a poor weather outlook. Our plan B granted us several less consequential options. The spring is usually a great time for extended ski trips in the mountains. The weather is pleasant enough that winter camping is reasonably comfortable. Daylight grants more hours for travel. Avalanche conditions generally dissipate allowing us to move through steeper terrain with less worry.

This year was different. The avalanche conditions were not dissipating as they normally do. The solid freezes that we were relying on for safe passage weren’t happening and the “no thank you” layer that had lurked near the ground and haunted us all winter continued to persist. Following our new route, the first day of our trip brought us into the depths of the Sawtooths without skiing through much avalanche terrain. Day Two had the most consequential slopes and although we had decent options if we weren’t granted a freeze, we wanted to take the steeper, more exposed route which would lead us into more remote terrain with several exciting ski descents. We went to bed that first night hoping for a hard freeze. I crawled out of the wet cold tent around 4 am the next morning onto a soft, lightly crunchy surface. “Well, it barley froze last night,” I exclaimed, disappointment in my early morning voice. The decision was made. We would not be taking the longer and more exposed route. In this moment I thought about how much I admire my female partners and how we could come to this logical decision without unnecessary bravado. 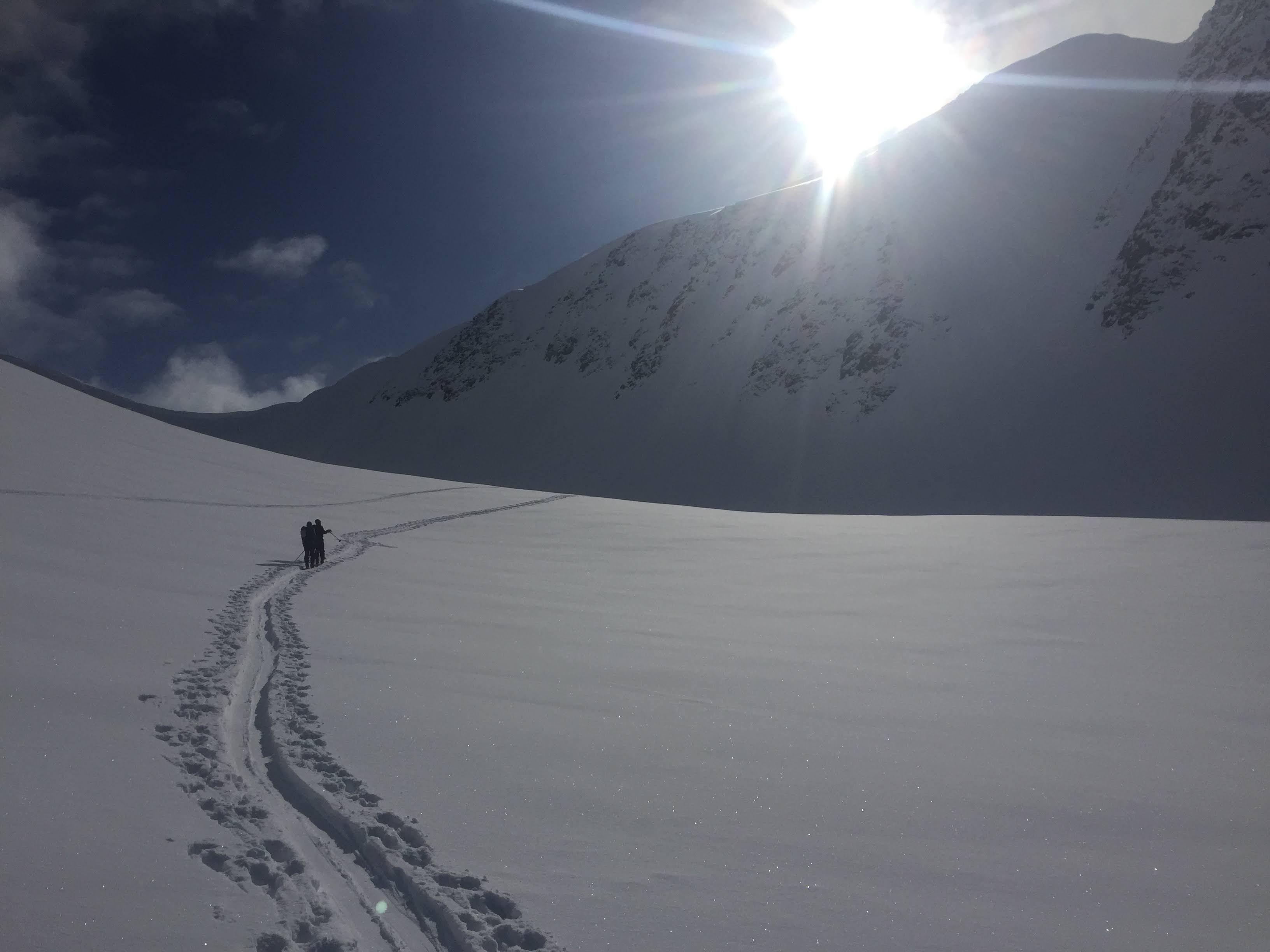 Despite the setback, we were happy for our early morning, and it wasn’t getting any colder. We headed up toward the saddle that sat just above camp. This was our safest exit option. Although it was a short climb it was steep enough to potentially slide and we didn’t trust the snow pack. We moved slowly, one at a time, watching each other, alert and ready to react. Our ski crampons scratched at the snow surface with each step, etching our way across and up the slope. The tension was high. We didn’t say much, but we all knew that these conditions were what we feared. Slowly and cautiously we made our way to the saddle. In our triumph and relief, we decided that it was only appropriate that we celebrate with some stellar dance and song. We looked out at the sparkling Sawtooths, her folds and ridges carried the peaks on her strong back. Gathering ourselves after our dance party and vocal performance we prepared to descend down a large tube into the valley and Imogene Lake below.

We made our way down, sliding and skidding through the morning mountain air. When we got down we found that the lake was frozen solid- an easy and fast passage. The three of us spread out. Crunching with our stomachs, dipping up and down, we double poled with surprising speed across her frozen blue glaze.As the sun woke the world around us the snow continued to soften. We moved with purpose, knowing that at some point soon we might be forced to stop early due to conditions. The three of us wound through her ridges and valleys making our way up towards the north-facing saddle that we hoped to get over. We were efficient, confident, moving with one another as we had so often through the years. Twisted burnt yellow and brick red intertwined in the grasp of whitebark pines that litter the landscape, their power rooted deeply in the frozen earth. A few hours later we stood at the top of the saddle ready to move into the safer terrain that waited for us far below. Lizzie was first to ski onto the slope. It was our final exposed run of the day, and much of the surface had small wet avalanche paths that had broken loose some days prior. We chose to ski the lowest angle next to an old slide path that had ripped out already. She hadn’t gone far when we heard the “whumph” that backcountry skiers dread and fear. Our breath hung in the air as we waited to see the slope move. Katie and I stood safe on the saddle, Lizzie was alone and exposed. All was still. Slowly and seemingly in unison we let our breath out. “Shit that was scary,” exclaimed Liz, her voice uneasy. “Let’s get off this thing,” Katie said.

Lizzie continued down, deciding to play it even safer by crossing onto the old surface of an avalanche path and making her way quickly and smoothly to safety. Katie and I followed the same path, one at a time, seeking that safe goal where Lizzie stood waiting and watching. Reunited, we stood in safety together, humbled by the power of the mountains and reminded of how small we are in her palm.

We moved on in unison, with happy chatter and the easy flow of each other’s company. Just before our camp we stopped for lunch across the valley from a large avalanche that appeared to have ripped out very recently. The crown etched its way across the face of the mountain, the edge of snow and earth a sharp contrast to the white snowscape. All the snow had been wiped clean leaving exposed soil, cracked broken trees, and destruction in its path. We sat sobered by its danger and the reminder of friends, loved ones and strangers who had been taken from us. 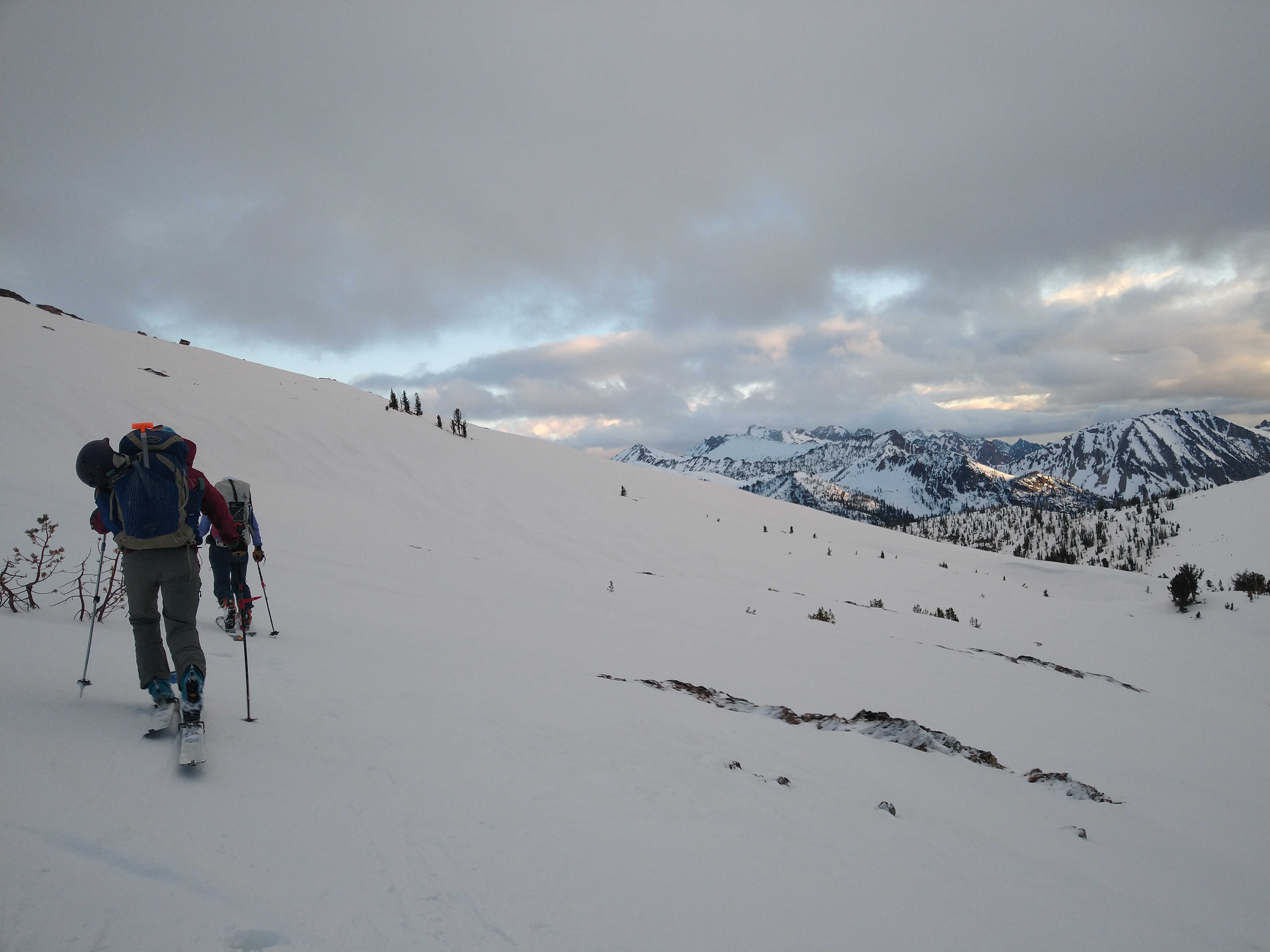 The rest of our trip we were able to manage the terrain without danger while still embracing the beauty that engulfed us. This trip was not an ‘epic’ documented on social media or one that pushed the limits of the truly hard core. For us, it was about being in one another’s presence in places that were new and beautiful. We set out with the goal to become better partners, to dance on some ridge lines and to embrace the utter power that we are privileged to experience. Looking back, I see the perfect reflection of the snow capped mountain on the low elevation lakes. The paths of exposed soil left behind when the snow ripped away from it’s winter holding place and the sorbet sky painting the peaks in the warm hue. We decided what to make of this adventure. We owe it to ourselves as women to pursue the adventures that inspire us to be better, not the ones that social media and societal expectations pressure us to do. My goal is to inspire women to support each other through outdoor pursuits. Not to judge one another, but to lift each other up. And to be inspired by the undeniable strength that comes with being women, strong and uninhibited, dancing wildly together in the outdoors. 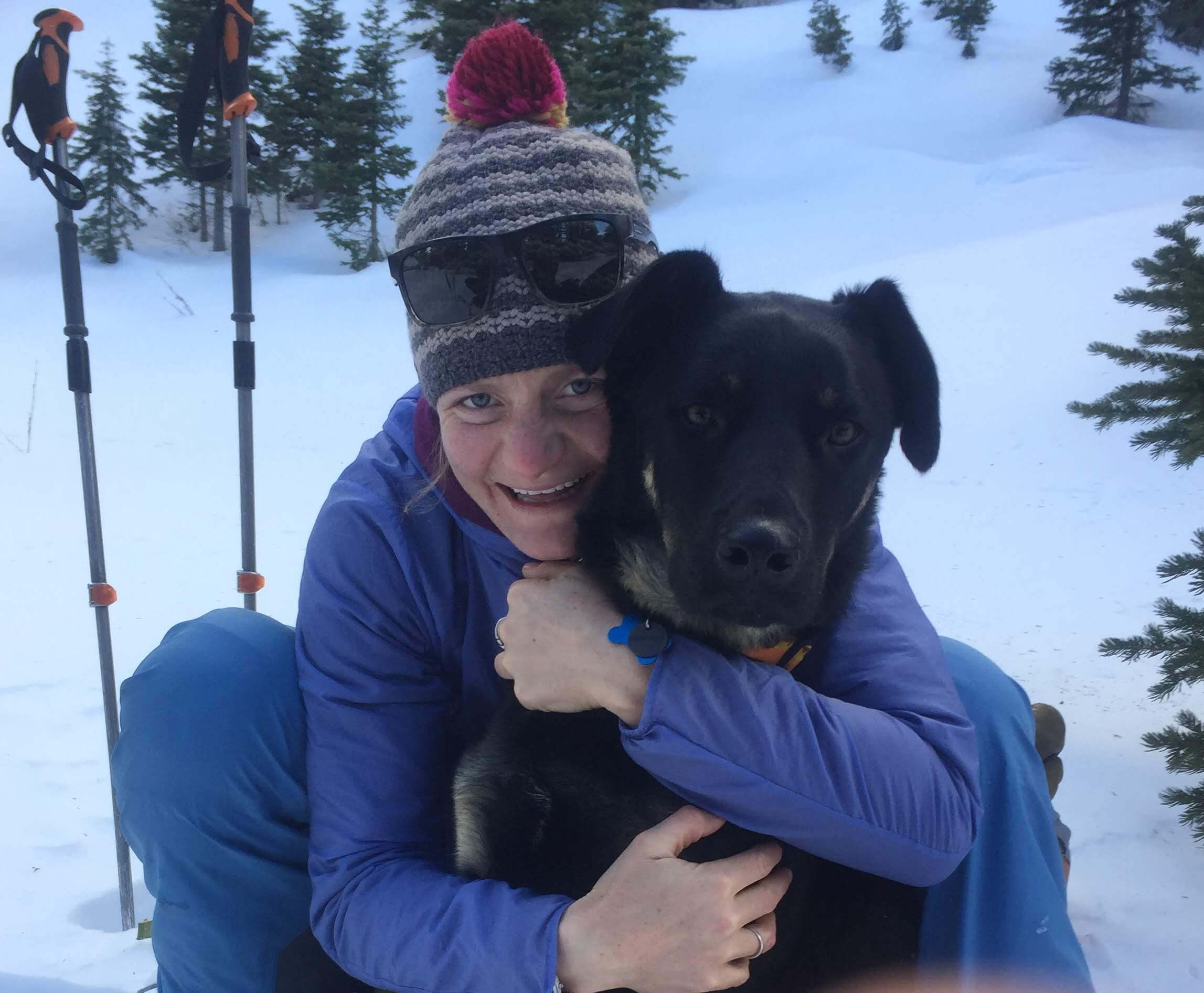 Ruby Zitzer was born and raised in Bozeman Montana. Her family always took advantage of the outdoor opportunities surrounding their home and the west. Ruby began skiing at Bridger Bowl at a young age and grew up competitively Nordic skiing. After high school Ruby took several years off spending most of her time traveling, running, biking, paddling and skiing. Ruby feels most at home when she is in the outdoors with her friends and family. In 2020 Ruby graduated from Montana State University with a degree in English Writing and Human Development. After graduation Ruby moved to Sun Valley, Idaho where she is currently living. In the summer Ruby works as Road, Mountain and Gravel Bike Guide. In the winter she works for Sun Valley Heli Ski and Sawtooth Avalanche center teaching avalanche awareness classes. Ruby has also recently started working construction and learning carpentry. When Ruby isn’t working she is often found in the mountains, on the rivers or snuggling with her dog.