Reflections on a Big Wall Partnership

It was June 2008 and Holly and I were launching up the Shield. The Shield is a C4F/A3 aid climbing route that climbs through a prominent headwall on El Capitan in Yosemite Valley. It’s wildly steep and exposed.

We had climbed another El Capitan route, New Dawn, a few weeks prior, so we felt pretty dialed. The weather forecast was solid, and I was looking forward to some time on the wall before warmer summer temps. We arrived at the base of Freeblast just before a team of two guys. The Freeblast is the first ten pitches of the Salathe Wall, with free climbing up to 5.11. It provides access to several other routes on the Southwest face of El Cap, including the Shield. The two guys sprayed about climbing fast, so we let them go ahead. Halfway up, I found myself waiting at the belay behind the team and one of the guys (them) apologized to me for jumping ahead. At this time (14 years ago) we were one of the only female teams climbing consistently in the Valley and we could climb the Freeblast efficiently. Holly was one of my first serious female climbing partners, and we were a competent, motivated team.

Two years prior, in 2006, I began my first season on Yosemite Search and Rescue (YOSAR). It was intense and wonderful and I was the only woman officially on the team. The year before I had climbed many Yosemite test pieces, but I had yet to climb El Capitan. By the end of that season, I had climbed three El Cap routes after honing my skills on Leaning Tower and Washington Column. 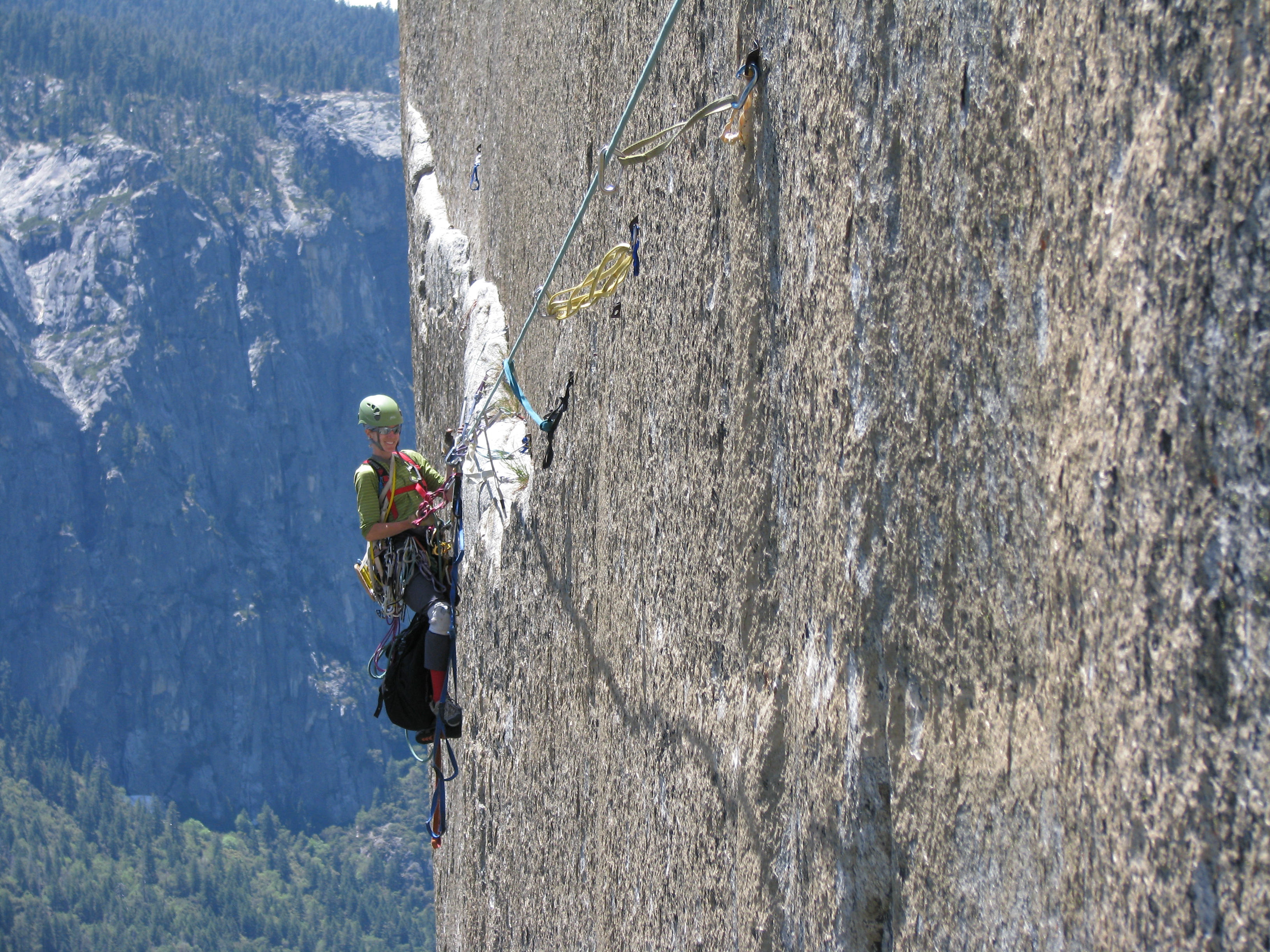 The author on "New Dawn". Photo courtesy of Holly Beck.

My second season on SAR, 2007, was the year I teamed up with Holly. I was nursing my (an) Achilles injury upon my return to Yosemite and realized that it would be a good time to improve my aid climbing skills. I was keen to get back on El Cap.

The problem was, I needed to find a solid partner for big wall climbing. I didn’t have a consistent partner even for free climbing; I climbed with friends who visited from Oregon, people who came to the SAR site, and my team members, but I wasn’t scheming bigger routes and goals with anyone. That is when I met Holly, an experienced aid climber, through our mutual friend Moose.

I think of Holly often because we had so many shared experiences. When I hear country music I automatically think of her. I don’t hate country music, but it’s not my top music choice. Holly loves country music. On El Cap, we would set up the portaledge, get ourselves organized, and turn on the radio to have dinner and relax. After a day of hanging on the wall it was part of the ritual, along with baby wipes and hand salve. Sometimes we switched stations and listened to “The Hawk”, which played classic rock, my preference. But Holly singing to “AchyAchey Breaky Heart” was pretty hard to beat. With music playing we would pound out our tin can remains from dinner with wall hammers, look at the lights in the valley, and talk about past and present climbers, partners, and of course climbing on El Cap.

Holly was my main big wall partner and climbing mentor. She was unapologetically, enthusiastically psyched on aid climbing. Holly, to this day I believe, still has the record for the most different El Cap ascents for a woman. When we first met and she asked me to climb the North America Wall, I excitedly said yes.

We had different strengths. Holly was the aid ace on our team. She would go for it and figure out how to hook through a section or stack pitons. I always preferred free climbing over aid climbing, and was the taller climber at 5’6”. This meant that I would lead the rivet ladders and anything that the topo deemed “reachy”.

She works as an accountant and acted as such for our team. Her detail-oriented mindset meant we never forgot an item when packing for a wall.  I thought I was fairly organized until I met Holly. I have a general idea of all my climbing gear, food and possessions, but I do not have spreadsheets. 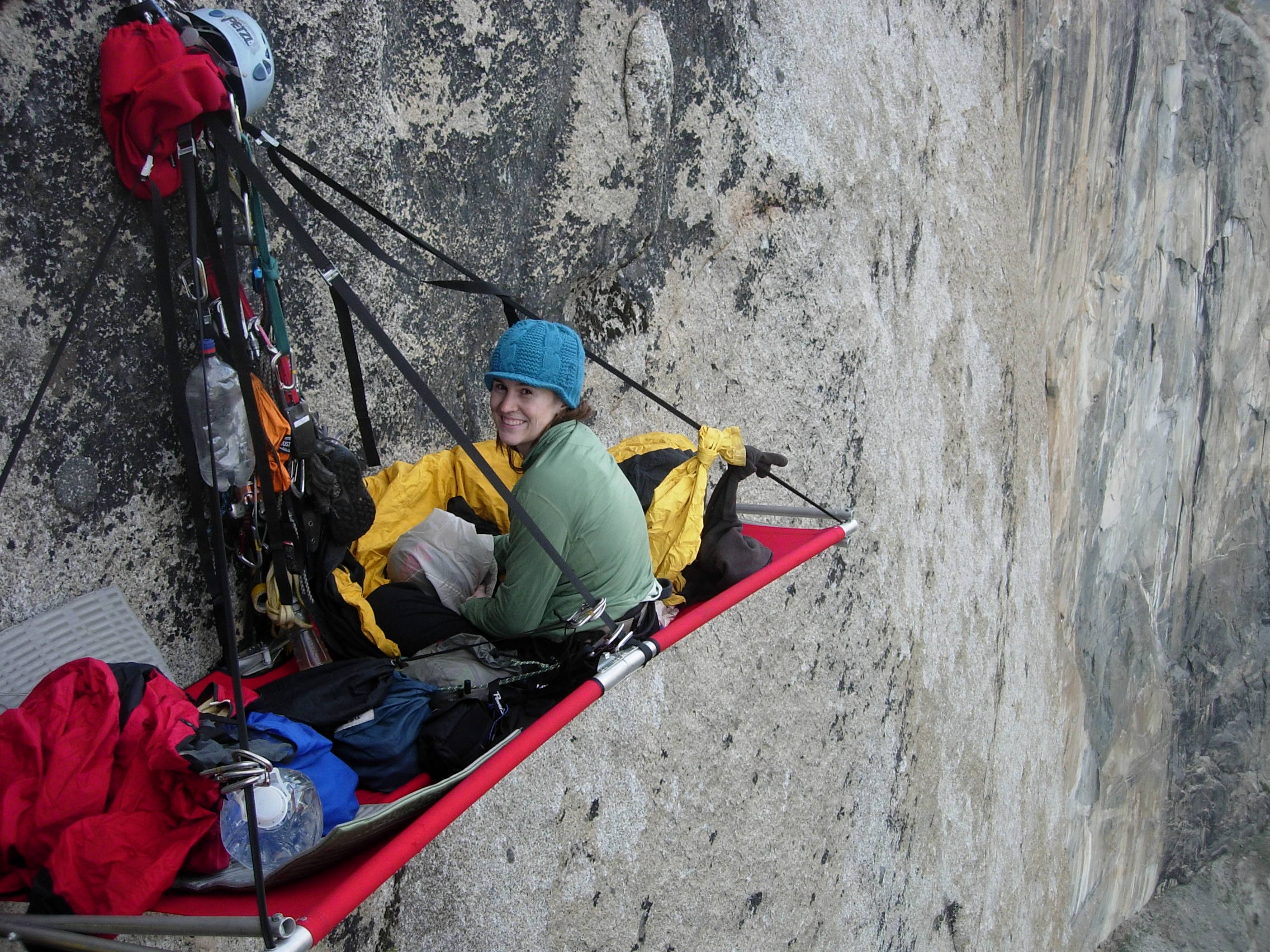 Our partnership grew from our ascent of the North America Wall and we climbed ten different El Cap routes over the next few years. We climbed new routes for both of us and repeated a few she had done before. El Cap felt wild and adventurous. I loved being up there with Holly. She was intense and driven in every activity she pursued, and although we had different demeanors we worked well together.

I feel so lucky when I think back on our ascent of the Salathé Wall and how we didn’t see another party on the route. This was prior to the common practice of rapping in (the) from the top of El Cap. Back then, only 16 years ago, most people climbed El Cap ground up. We had the route to ourselves in May, unheard of today.

Holly took a big fall on Never Never Land in 2007. It’s the only time I’ve seen a Screamer release (a Screamer is a shock-absorbing sling that rips open to reduce force on a piece); it caught her and softened the fall onto a rivet. She came down, rested near the Pinnacle of Hammerdom, and then went back up and finished her lead. I decided to take a Wilderness First Responder course after that experience.

Back on the Shield Headwall, I took an aid fall and an offset green/yellow Alien hit me in the mouth. I came down to the belay, rested, and evaluated myself. I had a puffy lip and lots of blood but all my teeth were intact. Not wanting to let my partner down, I finished the lead. Holly did another hard lead on the headwall, with stacking pitons. The Shield headwall is very steep and I vividly remember the exposure from my hanging belay and being very cold. I followed the pitch in my big parka. 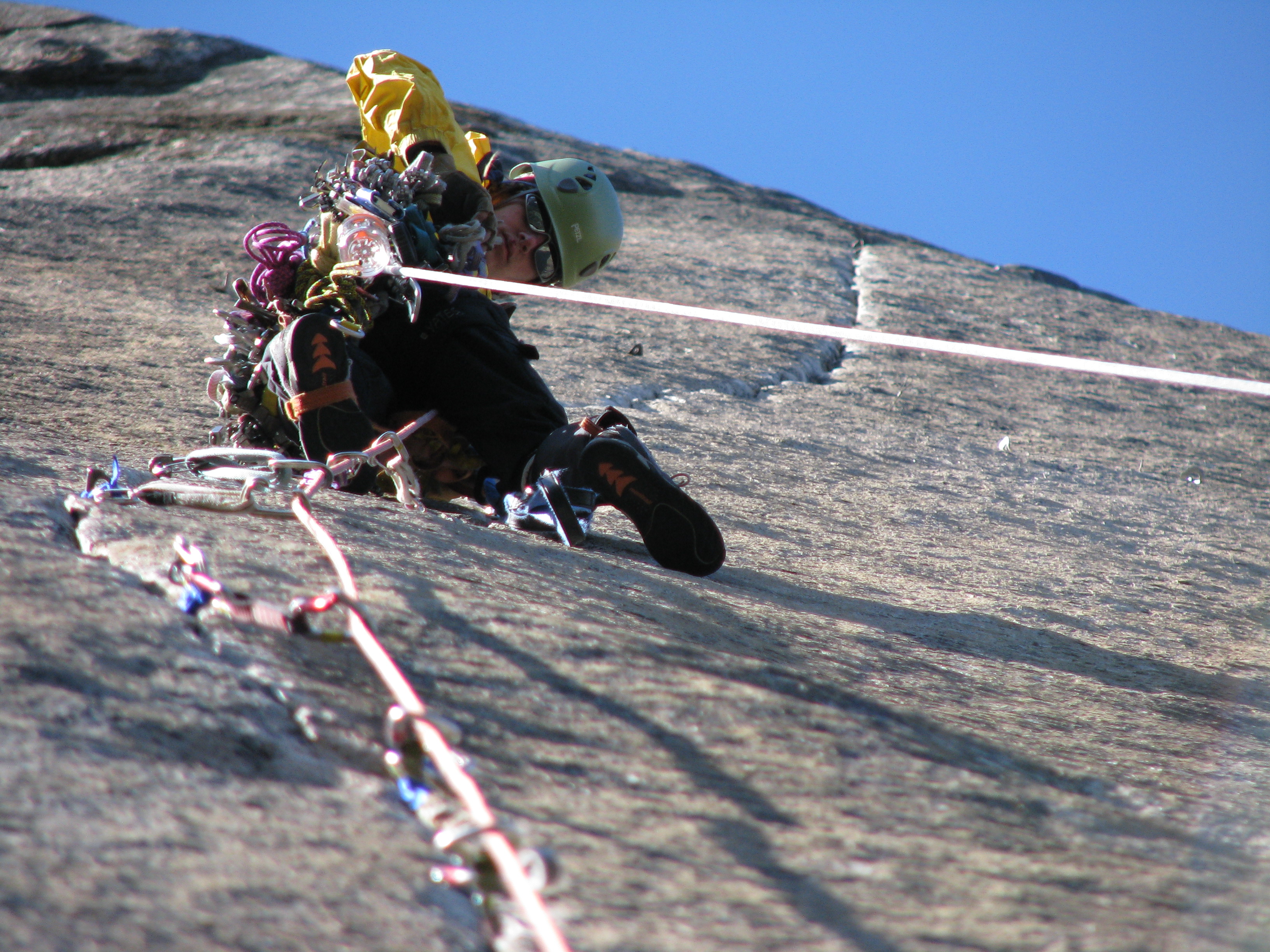 The author on the Shield. Photo courtesy of Holly Beck.

Aid climbing is a lot of physical work, but it can also be mentally taxing. I am fairly risk-averse but love all types of climbing including aid climbing. I am able to be present and focus on each move when I delude myself to think of each piece as a bomber placement after bounce testing. But then a piece rips, like the offset Alien on the Shield Headwall, and I am challenged with that fear. For aid climbing I have to shut the fear out of my mind to be efficient. For example, when using a fixed RURP on the New Dawn route, I used a tiny string from my water bottle to fit through the hole, and I could not focus on that in the moment to move past that section.

Now that I mostly free climb, friends ask me with bewilderment why I have done so much aid climbing. Sometimes it’s hard to think of the reasons why it was enjoyable for all those years. Carrying a heavy haul bag down from the top of El Cap is not fun. Ripping a piton in the dark on the Muir Wall and still going up to finish the lead is not fun. All that aside, the experience of big wall aid climbing is truly amazing: puzzling through aid placements, visiting parts of the wall that have still not been free climbed, sitting on a belay seat watching my partner in the zone, having birds dive by, and leading with total focus on each placement. It’s the granite wilderness, the space, the focus, and the people I’ve shared those moments with.

After being on El Capitan I would always feel a great sadness a few days after being down on the ground and would want to go back up. I loved the extreme sense of presence I had when aid climbing. I loved the partnership of being with someone I respected, found interesting, and enjoyed spending time with. I’ve never wanted to solo a wall because I love the partnership aspect. 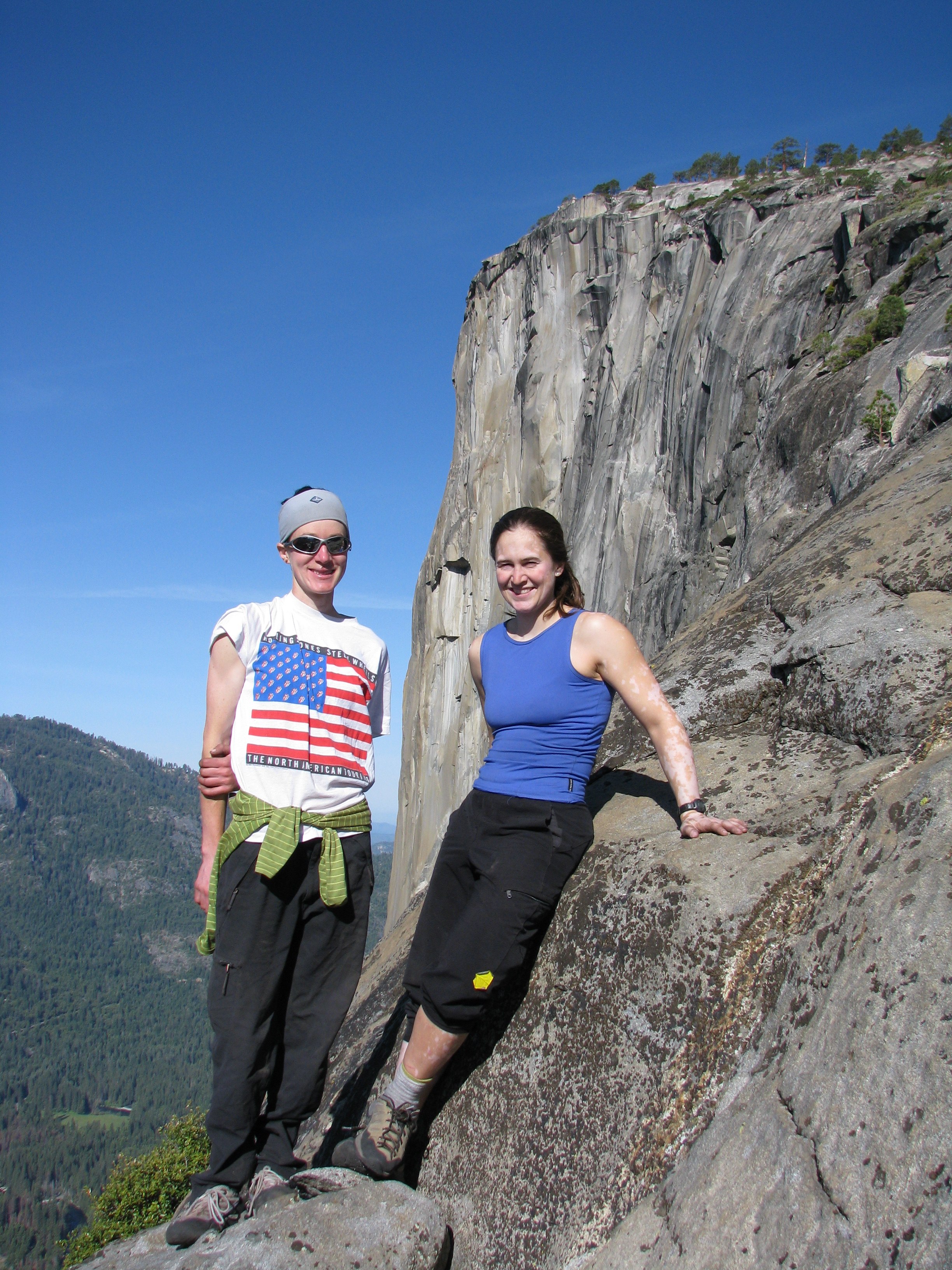 Lorna and Holly with El Capitan in the background. Photo courtesy of Holly Beck.

Holly and I don’t climb together as much anymore. Our lives took different paths and our partnership changed after her accident. Holly took a big fall doing the Nose in a day in 2009 with her partner and she broke 9 bones. Luckily she fully recovered. Looking back, it is strange to me that I climbed the Nose in a day only four days after her accident. I probably felt compelled to since I’d already made plans with my partner, though we decided against short-fixing because of Holly’s accident. I think I was also coping with the shock of her accident and did what I do to cope sometimes: go climbing.

Holly and I climbed a couple walls after her accident, but our commitments and priorities were changing and our partnership along with them. Our summers of being obsessed and addicted to El Capitan had passed. I moved on from YOSAR and went back to school. Holly got married and moved from Yosemite to a couple other national parks for a few years with her partner Jeff.

I am in love with climbing as much as ever. I crave climbing on El Capitan, and have climbed walls in recent years, but I am also psyched to alpine climb, sport climb, and adventure climb internationally. Though the climbing objective is important, just as important for me is the person I’m doing it with - the partnership. As I get older I realize I want to spend time with people I love and cherish. I still need that presence and focus that only climbing can bring, but I want to share the adventure with a partner who challenges me and who I push as well.

When climbing walls with Holly I had utter confidence that we would climb the route we started up and that it would be fun. We supported each other and through our partnership I learned about trusting a partner, committing to a route, and finding it in myself to do more than I thought was possible. 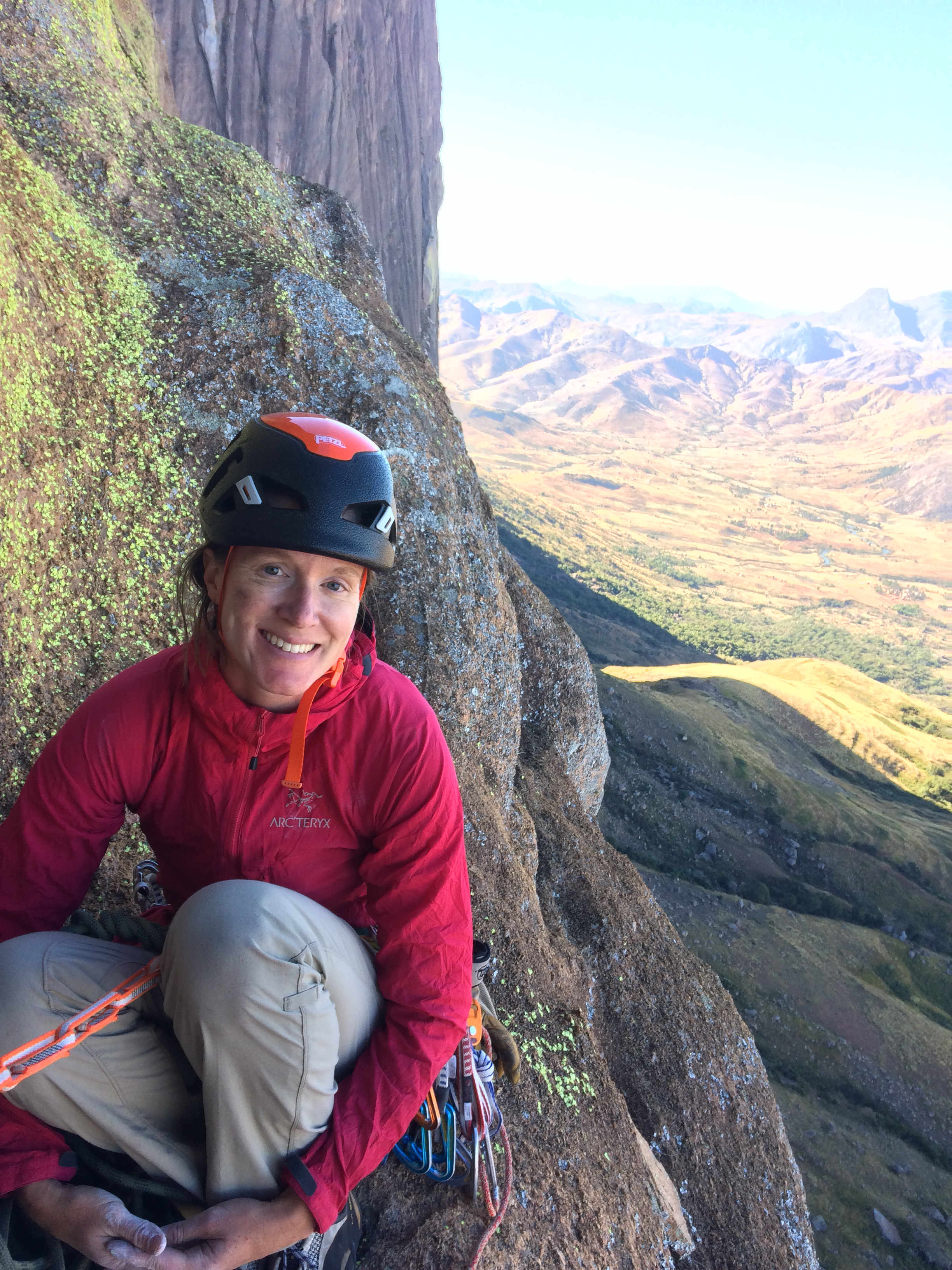 Lorna was introduced to the mountains by her British parents on hikes in the Lake District and was raised in Portland, Oregon. She grew up skiing on Mt. Hood and started climbing in college, taking a semester off to climb in Canada. Wildlife research with Spotted owls took her to Yosemite. She worked on YOSAR for 5 years and has aid climbed El Cap by 16 different routes with over 20 ascents. Outside the States she has climbed in many places including Patagonia, Madagascar, Australia, and Canada. Presently she works as a Psychiatric Nurse and spends her free time climbing locally at Smith Rock, skiing in the Cascades, and stretching with her kitten Pep. Lorna lives in Bend, Oregon with her husband Hiroki.

Next up: Sun Hoody Review